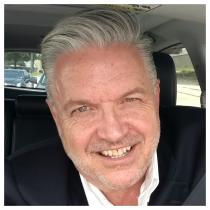 A lot more clients flowed through the facility today compared to my previous two afternoons volunteering, 13 to 15 I estimate while I was there. Most of them came through to get food, a few to charge their cell phones, play games, and a few to get showers. I managed the shower check-in / check-out for a while. I also learned the protocol for clients using one of the 3 laptop computers - they have to demonstrate proficiency in one of the categories listed on the sign-in sheet ("Create a clean email account + forward an email," Use a password keeper, Set up / transfer money from a GoFundMe account," etc) to get computer use for 1 hour - for which I qualified a client through his demonstration for me of his creation of a Yahoo email account and forwarding an email to / from it. Of course, this requires access to another device for verification, like a cell phone, which not every client has. I also saw a couple come in with their small child for the first time. This one was 8 months old and in a stroller. They are a "success story" according to Tondra, a staff member. She said they have a place of their own now, he has a steady job. I played another game of chess with CJ / Chris, in which it took him longer to beat me. And he tried two unusual moves which I called him on, which he spent about 10 minutes looking up rules to validate, but ultimately couldn't, especially since the printed rules from the game's box forbade that move. He grudingly accepted the correction and we put all the pieces back where they had been. It was a valuable exchange between us in that he got a sense of my sense of fairness, and how I validated that fairly diplomatically for him. At one point in all that, before I documented my point and he couldn't, since I wasn't "comfortable" with those moves of his, I offered to forfeit, or concede, which seemed to help him focus on trying to support his point. He is definitely the client I have gotten closest to at SYM so far. Next-closest are DQ and Ellie. Staff members I'm closest to are Tondra, Darvin, Porsha, and Izzy. The attached photo is of SYM's computer and the big yellow card is the sign-up / skills check-off list.

This was another very educational experience. I oversaw the shower check in and check out in the later afternoon, inspecting the shower bathroom with the clients who used it, making sure they were following the rules. I also played chess with a client, it took him a little longer to beat me than we both thought it would, so I felt good about that. A young man nicknamed "Moose" visited to ask questions about the shower procedure, rules, experience, etc. I also brought three large trash bags full of used clothing from home to donate. There were about a dozen clients in all while I was there. One young man played the guitar, another the piano. Another got help with making sure he was all lined up to get to his first day at his new job the next day.

Felt good to be back!